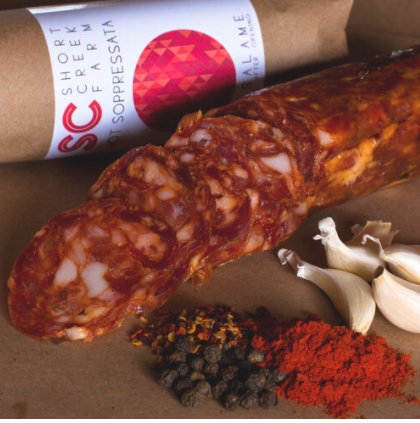 Co-founders Dave Viola and Jeff Backer started Short Creek Farm in 2015 on 300 acres in Northwood, New Hampshire. They produce high-quality value-added meat products from pastured pork and grassfed beef raised on their farm. Jeff and Dave want to grow Short Creek from a small local farm to a regional processed meat company, creating high quality charcuterie and sausages from their own meat as well as meat they purchase from other American family farms.

Jeff Backer, Farm Manager
Jeff Backer is responsible for managing livestock production at the farm in Northwood, New Hampshire. Though he did not grow up in a farm family, his studies of wildlife biology, ecology and conservation at the University of Rhode Island led to an interest in agroecology and ultimately to actively participating in small-scale local farming. He began farming in 2008 as an apprentice at Moon in the Pond Farm, a small and diverse farm and homestead in Sheffield, Massachusetts. His time at Moon in the Pond reinforced his appreciation for great food, especially meats smoked and cured using old-world methods, and made him realize that long-term success in farming meant taking it seriously as a business. In 2009, he moved on to apprentice at Natural Roots CSA, a productive and successful vegetable farm in Conway, Massachusetts. Using the innovative production methods he learned at Natural Roots, methods that today would be called regenerative agriculture, Jeff went on to start his own farm business, Potter Hill Farm, in 2010 in Grafton, Massachusetts. At Potter Hill, Jeff turned 25 acres of old fields into a farm producing heirloom vegetables, pastured pork, and grassfed beef. Jeff sold the growing Potter Hill Farm business to another farmer in 2015 when he co-founded Short Creek Farm with longtime friend, Dave Viola. At Short Creek, Jeff continues to develop production systems that reflect his love of food, his background in ecology, and his experience with regenerative farming practices.

Dave Viola, Processing Manager
Dave Viola is responsible for food processing operations at Short Creek. With 10 years of experience in the food industry, Dave has had a hand in progressive companies throughout New England. He got his start developing well-respected charcuterie programs for James Beard Award-nominated chef Matt Jennings, first at Farmstead in Providence, Rhode Island and later at Townsman in Boston, Massachusetts. He then delved into the world of whole animal butchery while managing production of retail cuts and fresh sausages at Vermont Salumi in Plainfield, Vermont. While bringing Vermont Salumi’s new line of dry-cured salami to market, Dave gained valuable insight into USDA regulation of small meat processors. Leveraging his academic background, he distilled statutory requirements and the input of consultants into a comprehensive food safety plan and then negotiated with state and federal agencies to successfully gain regulatory approval. From there, Dave moved on to manage New England Charcuterie, in Waltham, Massachusetts, from the company’s founding in 2013. Being there from the start afforded him the opportunity to develop a wide-ranging food safety program, to create formulations and processing methods for over 100 unique products, and to implement standard operating procedures that remain in place today. Dave also brought about New England Charcuterie’s transition from a retail-only business to a USDA-inspected wholesale operation. Although he stepped away from a day-to-day role at New England Charcuterie in order to co-found Short Creek Farm in 2015, Dave remains involved with the company to this day as a consultant.

Retail cuts and other value-added products like salami and bacon are produced under contract by regional USDA processors.
By opening of a new 6,000 sq-ft USDA-inspected facility, they will expand operations to encompass all aspects of meat processing, from butchery to salami curing and drying.
Will produce new line of lower-cost sausage, bacon, and salami made with heritage breed pork sourced from a co-op of farms in the Midwest, and these products will be distributed to medium and large retailers from Boston to Portland.
Will continue to market their own farm-raised meats under the new Short Creek Farm Homegrown brand, marketing these bespoke meat products to farm stands and specialty shops throughout the Northeast.
Read Our Research Disclaimer