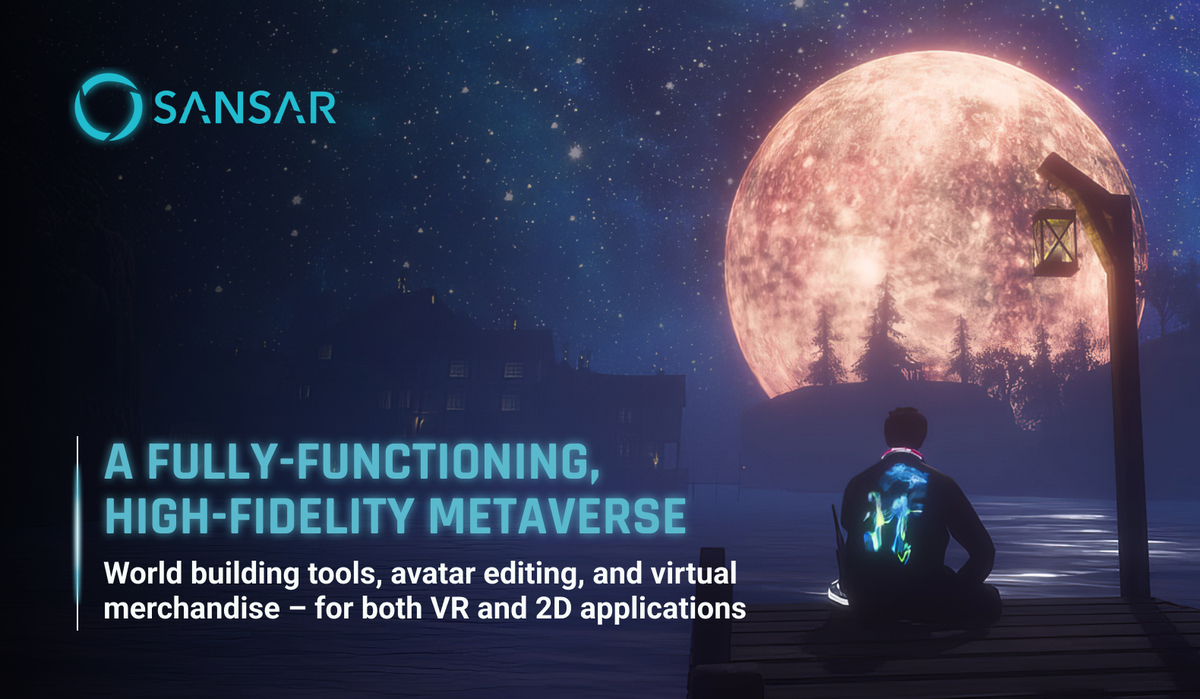 Sansar, Inc. is the creator of the Sansar virtual platform, one of the leading metaverse technology companies. Sansar is available on a PC desktop, with or without a VR headset. Uniquely, the Sansar experience is available through a streaming app on compatible LG Smart TVs in the LG app store, and soon on web browsers and mobile devices. Sansar, Inc. is in the pre-revenue stage and is transitioning from product development to monetization.

Sansar is seeking to become a metaverse-based home for billions of users worldwide. To the best of our knowledge, Sansar will soon be the only platform able to monetize the metaverse through real-time contextual ad placement. Additionally, Sansar already has a user generated content (“UGC”) marketplace with over 50,000 items where users can create, sell, and benefit from the new digital economy. In recent years, metaverse technology has emerged as a diverse and fast growing sector. According to recent valuations, the metaverse and associated products are worth over $38B, growing at a CAGR of nearly 40%* and have the potential to generate up to $5T in market share by 2030.* Sansar provides B2B clients the comprehensive technology infrastructure necessary to quickly establish a white-labeled metaverse presence, minimizing customer acquisition costs as brands promote their own metaverse experiences, thereby increasing overall platform engagement.

, James Chance Richie CEOMr. Richie brings a unique perspective to American business by capitalizing on deep educational and real-world experience to propel ideas to action and economic opportunity to enterprise value.​ Mr. Richie has leveraged his experience in the Navy and in the investment banking, oilfield, software development, restaurant, and automotive industries to invest in and have successful exits from multiple innovative businesses throughout his career.​ Mr. Richie has built and sold successful software and oil and gas businesses to both public companies and a large private equity firm.  Mr. Richie holds a B.S. in Chemical Engineering and an MBA from The University of Texas at Austin. Mr. Richie also holds a master’s in engineering from Columbia University. Mr. Richie is also a 14-year US Navy Veteran., Department of Energy certified nuclear engineer and Navy Nuclear Power School Graduate, having most recently served as a Lieutenant on the nuclear submarine USS Alabama (SSBN-731). Joseph Michael Callahan CIO/COOJoe Callahan is the Chief Information Officer at Sansar. With over 30 years experience in developing mobile technologies and leading various teams, Joe is a perpetual innovator, serial entrepreneur, and true visionary. His career path has included various programming and engineering positions at Scott Paper, General Motors, Johnson and Johnson, and York International before emerging as an entrepreneur when he founded his first company in 1991. Bringing together design, engineering, development and creative marketing,  Joe has helped countless companies grow through the deployment of advanced platform solutions and mobile technologies. Driven by an unwavering inventor mentality, Joe leads a development team of over 60 engineers, investing over one million-man hours into the Ciright monolithic core technology. He is the author of multiple utility patents which include dozens of CIP patents across multiple industries including digital media, IoT, fintech, and the metaverse.  Joe is a proud graduate of Drexel University and recognized as an award-winning entrepreneur and thought leader, receiving various accolades for his accomplishments including EY’s Entrepreneur of the Year –Technology, Drexel University’s Alumni Entrepreneur award, and Irish Echo’s Irish American Business Chamber’s Entrepreneur of the Year award.  Mark J GustavsonBoard ChairmanMARK J. GUSTAVSON, has 17 years of business development, transactional, alliance management, finance, operational, company formation and IP experience with emerging technology companies. During his career he has acquired extensive experience integrating business disciplines in connection with emphasis in turn-around transactions. Mr. Gustavson has led and closed dozens of transactions with cumulative valuations in excess of $280MM in industry-transforming technology companies. In March of 2020 Mr. Gustavson acquired Sansar from Linden Labs Corporation implementing an expansion plan successfully deploying virtual reality applications for live events & festivals including the renowned London based Lost Horizons festival, Glastonbury, gaining an audience in excess of 4.2MM attendees. Sansar was sold to Sansar, Inc. in mid-2022. Mr. Gustavson has granted and patents pending addressing augmented reality-based search technologies with recently issued technology optimizing artificial intelligence search systems for application to search queries: US 11,347,817 B2 Debby Van Veen Director of Product Debby van Veen is an accomplished businesswoman with over 20 years of experience in 2D and 3D platforms. She started her own web hosting company in 2002 and later transitioned into the 3D fashion industry, where her background as a daughter of a professional seamstress and her innate talent have enabled her to excel as a 3D artist for over 16 years. Debby has worked with esteemed clients like Nike, Don Diablo, Twitch, Roddenberry Entertainment Inc, Absolut Vodka, Monster Cat, Yultron, Elrow, Heineken, Monster Energy, Bootshaus, WDR (German Television), LWE (Tobacco Dock), Splendour in the Grass, Cyberdog Kappa, and Elvis Presley's original IP holder. Debby’s background in virtual reality, business, and the creative process makes her a versatile professional, skilled in operating in a wide range of virtual/gaming platforms, and she is known for her leadership skills, strong organizational and communication abilities, and attention to detail. Stefanie HerzerDirector of Creative Experiences Stefanie was born and raised in Germany. She has always felt a strong urge to create. In her high school years, Stefanie discovered the power of software engineering to empower a new level of creativity. Stefanie's first major software application “Creator” an object-oriented animation system was a great success in Europe. In 1995 Stefanie migrated to the US to join NeXT Computer. In her first year at NeXT Stefanie was part of the WebObjects team. When Apple bought NeXT, she was responsible for the first MacOS X Finder by integrating HFS+ support into the operating system. She later also implemented the first release of Apple's Contact application, including its underlying database. In 2007 Stefanie discovered Second Life where she created a successful brand selling avatars. In 2017 Stefanie joined the Sansar community where she became a well-respected creator of interactive experiences. In 2022 after a second time at Apple, Stefanie joined the Sansar team as Director of Creative Experiences.  Ollie RankinDirector of Live Entertainment Ollie Rankin is a Kiwi-Canadian creative technology pioneer, award-winning multidisciplinary artist and futurist. Two decades at the forefront of the global visual effects industry, from The Lord of the Rings to Alice Through the Looking Glass laid the creative and technical foundations for his work in the emerging field of XR. Rankin has produced music festivals in the metaverse that were seen by millions, won accolades for his virtual production and virtual reality films, and contributed to groundbreaking technological advancements in spatial computing. He was an early inductee into the Unreal Virtual Production Fellowship, an industry advisor to NASA, is a member of both the Visual Effects Society and VR/AR Association and has been recognized as a top ten thought leader in VR. Rankin joined Sansar in 2022 as Vice President of Live Entertainment, with a mandate to build an entirely new talent and content ecosystem, championing inclusivity, accessibility and sustainability.