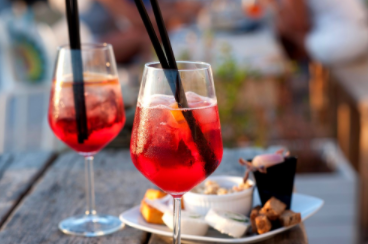 The restaurant will be located in the Berkeley neighborhood of Denver, Colorado, a primarily residential area that is close to many amenities, including Tennyson street, which offers a selection of restaurants, bars, and small shops. The area is highly attractive for many demographics, ranging from young professionals, to families, to empty nesters. Our target clients will be looking for an authentic, intimate dining experience while trying to avoid a formal restaurant or a loud and more crowded sports bar. Voghera compliments the energy of the Berkeley neighborhood perfectly.

Marco, Owner
I was born and raised in a small town in the outskirts of Milan, Italy, and moved to the US in 2013. Prior to my emigration to the United States I worked in the hospitality industry as a sports entertainer for an Italian tour operator called Veratour, which allowed me to live incredible experiences both in Italy and abroad, including the Amalfi Coast, Africa and Caribbean. I landed my first American experience working as a waiter at Disney Epcot in Orlando, where I spent a year. It wasn’t long before I fell in love with this country and little did I know that my “American Dream” was just beginning. I learned right away that in the US it doesn’t matter where you are from, what color your skin is, what your religious or political beliefs are, the bare English you speak; if you want to make it, you can make it. During my incredible Disney experience I kept in touch with Nicole, whom I met while working at the resort in Mexico, and who eventually became my wife and mother to our son, Leo. Upon finishing my employment with Disney, I made the decision to relocate to Colorado, where my wife has been living for most of her life. I continued my hospitality career working for Il Fornaio, a 21-unit fine dining Italian restaurant headquartered in California. Not long after, I decided to follow my manager Jorge’s recommendation, who at that time was working as night shift manager because of his daily job as an insurance broker, and obtained my P&C license. Jorge introduced me to the brokerage firm and I signed the contract to become an insurance broker. As time went by, Jorge and I decided to open our own firm and IMB, LLC was formed in August 2016. Though I decided to sell my 50% ownership of IMB to better take care of my newborn Leo, I am still a passive P&C producer for the agency to this day, while working on weekends at Firenze a Tavola, the fine dining concept of Parisi, the Italian restaurant on Tennyson Street

Davide, Lead server
Davide was born and raised in Lake Como, and after attending the hospitality college in the spectacular town of Bellagio, moved to the US. His credentials, among many others, include owning and operating a restaurant in San Francisco and working for 10+ years on the Las Vegas strip for a prestigious Italian restaurant. His professional college degree and real work experience make him a fundamental asset not only in the customer experience but also in the day to day operation of Voghera, providing invaluable knowledge and recommendations on how to successfully run such an enterprise.

Viviana, Culinary Director
Viviana, born and raised in Tuscany, moved to Denver a few years ago. She will be the culinary director bringing to Voghera the “Italian mother” kind of knowledge when it comes to making sure the food we serve is made with Italian love, passion, and attention to detail.

Leo, Kitchen Manager
Leo, born and raised in California, has been working at Il Fornaio Denver Tech Center for the last 6+ years, and that is where we met. As a young cook he quickly learned how to operate in a high-volume and fine dining environment, which represents the most challenging situation. His moderate temper allowed him to maintain composure even in moment of high stress. His direct managers in the kitchen have been training him hardly on both, what really means cooking Italian food, and what is behind the artistic side: doing the math on purchasing, how to handle food cost, how to properly inspect food items, kitchen equipment, and strictly comply with local and federal health regulations.

Surrounding neighborhoods with a combined population of 48,000 and $95,500 medium household income
Berkeley is the trendiest neighborhood in Denver, Colorado
Historic part of town, known for its nightlife and art gallery exhibits
Small business-friendly part of town
Read Our Research Disclaimer