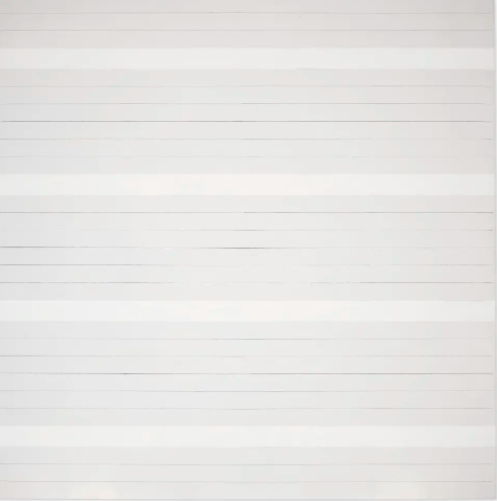 Acrylic and graphite on canvas

Agnes Martin (1912– 2004) was a pioneer of Minimalism and highly influential in her meditative approach to geometric abstraction.

As a pioneer of Minimalism, Agnes Martin is considered one of the most important American painters of the 20th century.
Untitled #12 is executed in Martin’s identifiable muted palette with horizontal graphite lines in her signature 72 x 72 in. square format, making it a highly desirable example for collectors.
Similar works from the period have sold for over $5 million, including: Untitled #7 (1984) which sold for $5,712,500 on May 16, 2018, and Mountain Flowers I (1985) which sold for $5,218,650 on June 29, 2020.
Masterworks was offered several paintings on the private sale market that had asking prices of between $6-9 million. We are offering Untitled #12 for $4,662,000.
Martin is represented by PACE Galleries – one of the top 3 galleries globally – which could bring further momentum to her market.
Although there are no guarantees, similar works have appreciated at 14.3% per year historically. Additionally, recent collecting trends have resulted in accelerated growth of important female artist markets.
Before her passing, Agnes Martin was granted two of the highest rewards for a living artist: The Golden Lion of the Venice Biennale and the National Medal of Arts.
Read Our Research Disclaimer