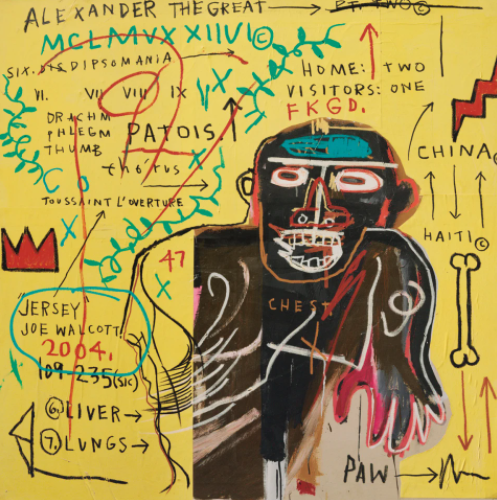 Jean-Michel Basquiat is widely celebrated for his inventive visual language that fused graffiti with high art.

All Colored Cast (Part II) is one of two canvases that Basquiat created in 1982, whose title is a direct comment on racism in Hollywood. The work also has a number of historical references in regard to black history, such as famous boxer Jersey Joe Walcott, and Haitian revolutionary Toussaint L’Overture.
The painting was appraised by an independent appraiser for $24,000,000 prior to Masterworks’ acquisition.
Although there are no guarantees, similar works have appreciated at 22% annualized historically from 1986 to 2018.
1982 is widely regarded as Basquiat’s “best” year, and works created during this pivotal time in his career are highly coveted by collectors.
In addition to the year, this work also includes Basquiat’s iconic crown motif, a central figure, and a variety of oil stick text – all desirable elements of top Basquiat artwork.
Works by Basquiat continue to command high prices at the major auctions, with two major works selling this past May: Versus Medici (1982) sold for $50.8 million at Sotheby’s, and In This Case (1983) sold for $93.1 million at Christie’s.
Basquiat’s current top record is for Untitled (1982), which sold for $110.5 million in 2017 – the highest price ever paid for an American artist at auction.
Read Our Research Disclaimer