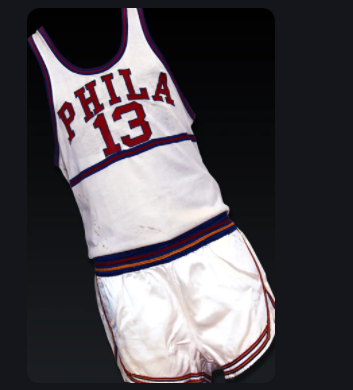 Collectable is honored to present one of the most iconic game worn uniforms in all of sports - NBA legend Wilt Chamberlain’s 1959-60 Philadelphia Warriors rookie home full uniform.

Membership Units represent ownership rights in a Limited Liability Company, indicated by the right to receive cash or unit distributions, declared by the Manager(s) of the LLC, and having voting rights in the governance of the Company.

This 1959-60 Philadelphia Warriors home rookie full uniform was worn by NBA legend Wilt Chamberlain. The jersey contains both the top and bottom - jersey and shorts. This is a complete uniform. Rarely are Basketball bottoms included with uniform tops.
This exact full uniform sold privately for $700,000 in the summer of 2019. Since then, Chamberlain 1961 Fleer PSA 9 cards have risen from ~$38,000 to ~$461,000, over 10x appreciation.
According to SCP Auctions, “This is one of the finest game worn uniforms known to exist in the basketball memorabilia industry. This is the home full uniform worn by Wilt Chamberlain of the Philadelphia Warriors during his historic and outstanding rookie season 1959-60.” Chamberlain would have played all his home games in this uniform.
The jersey was authenticated by Mears Memorabilia Evaluation and Research Services and assigned a top grade of A9. The jersey was photomatched by MeiGray.
Chamberlain averaged 37.6 points per game and 27 rebounds per game in 1959-60, and broke 8 NBA records during his rookie year.
During his rookie season, Chamberlain won NBA MVP, NBA All Star Game MVP, and Rookie of the Year. In addition, he was selected to the All-NBA First Team.
Among the matching photographs is a detailed color image shot by Neil Leifer on January 5 1960 at Madison Square Garden showing the rookie Wilt exiting the court after scoring 52 points in victory over the Minneapolis Lakers (neutral venue).
Many collectors view this Chamberlain uniform as one of the finest game worn pieces in the sports universe. Other record breaking game worn sales include a Babe Ruth 1928-30 Game Worn Yankees jersey for $5.64M and another Ruth 1920 Yankees jersey for $4.4M. In addition, Michael Jordan’s final Wizards jersey recently sold for $570,000 in 2021.
The shirt shows heavy game wear evenly distributed throughout the mesh body shell and neck and arm openings. Spotting is found on the front (possibly blood) and there are some abrasions to the front and reverse numerals.
The consignor is retaining $318,750 worth of equity in the offering.
Read Our Research Disclaimer