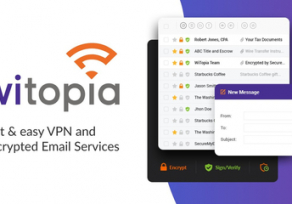 Experience the internet as it should be

At WiTopia, we want to make the internet as secure, private, and free as it was intended to be. Our VPN and email encryption services protect users’ data privacy while preventing cybercrime and identity theft through easy-to-install, widely accessible technology.

William Bullock, CEO
Bill has 28 years of experience in telecom, internet, and network security. He began his career as an Account Executive for AT&T and then, figuring the internet sounded like a promising concept, gave up his suits for jeans to work in Sales for a startup that became the first commercial internet provider. It was a good decision as UUNET (Now Verizon Business), grew to carry approximately 50% of the world's internet traffic. Within 3 years of starting, he was promoted to VP level where he built and led the core sales team responsible for sales of Internet access and network security solutions to all Commercial, Wholesale Carrier/ISPs, and the Federal and State Governments across a 10 state region, including Washington, DC. In this role, he also built specialized teams selling Web Hosting, Security Solutions, VAR/Reseller Programs, as well as managed field offices primarily focused on IP VPN and Complex Corporate Dial Solutions.

Steven Shippa, CTO
Steve has almost 30 years of experience in internet, network security, and systems engineering. Steve began his career as a Network Engineer for Telos, where he spent time as a system administrator of Mac, Windows & Unix systems as well as gaining experience with Cisco routers, local and wide area networking, and where he first experienced the "Internet."
Steve then joined internet startup UUNET Technologies (Now, Verizon Business), the world's first commercial internet provider, as a Sales Engineer. Over the next few years, Steve built and scaled the Sales Engineering team from 3 to about 150 headcount, globally, and oversaw the support and solutions design for sales revenue growth from 7M to over 6 Billion USD.
He was then chosen to lead the Internet and Systems Engineering team (250 headcount) where he had responsibility for the integration and day-to-day operation of UUNET's authentication network which supported 25 million customer sessions a day and 3 Billion USD in annual revenue at its peak. He holds a B.S. in Computer Science from Houghton College.

Market Size: The global VPN market is expected to grow from $25.41 billion in 2019 to $75.59 billion by 2027. The global encrypted email market was valued at $3.86 billion in 2019 and is projected to reach $19.26 billion by 2027.
Growth Opportunity: We have a solid VPN business, but when combined with our new Email Encryption service? Magical.
Disruptive: Our new Email Encryption service is not only "cheaper, better, faster." It works with ANY email address and users can even try it for free!
Read Our Research Disclaimer