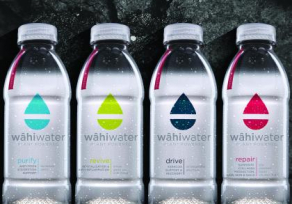 Plant-based, functional beverage retailing nationallyWahi Nutrition has leveraged one of the top trends in food and beverage (plant-based products) by becoming one of the first companies to infuse pharmaceutical-grade plant extracts into water, which we designed to deliver specific health functions based on the blend of infused extracts.Current offerings in the water category are only differentiated in a few primary marketing messages: pH, label design, charitable causes, and water source. Wahiwater innovates the product in the bottle by bringing pharmaceutical-grade plant extracts to water...

Geoff Murphy, Chief Executive Officer
Geoff has over 30 years of experience in the food and beverage space. Geoff has a degree in food science and spent 13 years with General Mills, with responsibilities in Quality Control, R&D, and contract operations. His experience included work throughout North America, Europe, and Asia.Geoff then spent 17 years as CEO of Old Home Foods, an iconic food and beverage company in the upper Midwest that started in 1925. In this role, he accumulated extensive experience developing and launching food and beverage products both regionally and nationally.  Geoff has been an entrepreneur his whole life and has owned companies in spaces like restaurant, brewery, and commercial electrical contracting. Geoff lives in Minnesota with his wife and three children.

Peter Blankenship, President
Peter, with his brother, Sam, co-founded medical device company Streamline, Inc. in 2007. Streamline was later acquired by a public company in 2015, with an estimated 4 times return to investors.  Peter is now the President of Wahi Nutrition and is responsible for ongoing product development, retail support and capital raises.

Sam Blankenship, Chief Product Officer
Sam, with his brother, Peter, co-founded medical device company Streamline, Inc. in 2007, which was later acquired by a public company in 2015.  Sam’s vision of conveniently bringing the healthiest plant extracts to consumer diets led to the creation of Wahi Nutrition and wahiwater, and the development of future product extensions. Sam is responsible for the continued development and expansion of the current product line and future product line extensions.

Grew retail footprint by an estimated 14x from April 2020 to April 2021
Launched nationally in CVS HealthHUBs and Life Time Fitness locations in 2021
Raised over $1.2M from key investors, including Pro Football Hall of Famer Randy Moss as the first
Founders have prior exit success with medical device start-up Streamline. Leadership has over 70 combined years of CPG experience and CEO's prior product launch won the "International Innovation Contest" by News Foods Magazine in 2009
Three granted trademarks and a proprietary manufacturing process
Read Our Research Disclaimer