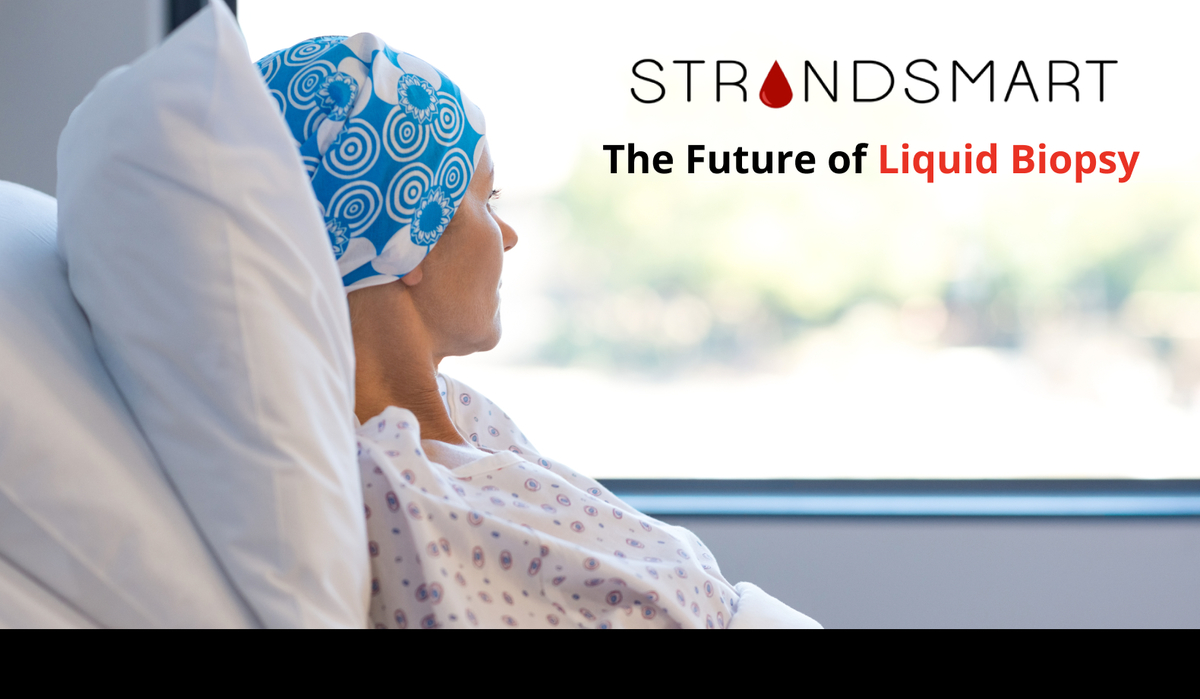 StrandSmart is developing a next-generation liquid biopsy (blood) test to enable precision medicine, or the ability to identify the biological driver of a tumor, allowing us to better match the right drug to the individual patient. We are pre-revenue, and are in development, working with academics and pharma to further validate our technology so that we can launch our blood tests to oncologists, giving them the tools to help improve and extend patients’ lives.

Adrianna DaviesFounder & CEOAdrianna is a serial life science entrepreneur with a track record of creating value for early-stage technology assets. Adrianna is passionate about solving big problems in healthcare, and her thesis is that prevention is the smartest approach. Adrianna is CEO and cofounder of StrandSmart, a seed-stage startup based in San Francisco, developing a liquid biopsy platform to bridge the gap from cancer detection to true personalized medicine with a simple lab test. StrandSmart is backed by Stanford StartX Med, Formic Ventures, Exxclaim Capital and a number of experienced and exited angel investors. Previously she was at Y-Combinator backed Qurasense Inc., a startup developing menstrual pads to monitor women’s health non-invasively. Before that she founded Sparkup Inc. a platform to accelerate technology transfer from universities to life science companies which was acquired in 2015. She holds her degree from McGill University where she played on both the Varsity soccer and rugby teams. She speaks English, Portuguese, French, Spanish, and Investor. In her time recovering from delivering outcomes for investors, you can find her shredding on some kind of board: surf, snow, kite, or skate.
John Park MDChief Scientific OfficerDr. John W. Park is an oncologist who specializes in breast cancer treatment and research. In his laboratory, Park works to develop novel technologies for studying and treating cancer. His research includes investigating new forms of immunotherapy such as immunoliposomes (antibodies paired with vesicles similar to human cell membranes) and vaccines that target cancer cells. He also conducts clinical trials of new cancer treatments. Park has been a visiting scientist at Genentech, where he performed research on HER2/neu, a protein produced in excessive amounts by some breast cancer cells, and Herceptin, a new treatment that acts as an antibody to HER2/neu.

Rex Yung MDChief Medical Advsior Dr. Yung received his undergraduate degree of BA in Biology cum laude from Harvard
College in Cambridge, Massachusetts. He followed up with matriculation at the University of
California in Los Angeles (UCLA), School of Medicine, and after a year in cardiovascular
research funded by an American Heart Association medical student research fellowship,
returned to clinical training in internal medicine at UCLA. His fellowship training in clinical
Pulmonary and Critical Care medicine was completed at the University of California in San
Francisco’s (UCSF) campuses and research at the UCSF Cardiovascular Research Institute.
Dr. Yung’s first academic appointment was at the University of Southern California where as an
assistant professor of pulmonary & critical care medicine, he was engaged in a broad range of
clinical activities; attending on the consult service, Surgical and Neuro intensive care units,
outpatient subspecialty clinic in Cystic Fibrosis and obstructive lung diseases. His own interest
in lung cancer, advanced diagnostic and interventional bronchoscopy led him to focus on
thoracic oncology. He was recruited to Johns Hopkins University where he served as the
Director of Pulmonary Oncology on the pulmonary service and for some years as the Director of
Bronchoscopy as well.
Nationally and internationally he has been recognized as an expert in the field of
advanced bronchoscopy and thoracic oncology, and have served in leadership positions with
the American College of Chest Physicians, Asia Pacific Society of Respirology, executive
boards of the American Association of Bronchoscopy and International pulmonology, the World
Association of Bronchology and Interventional Pulmonology amongst other national and
international subspecialty medical societies. He has conducted sponsored basic pre-clinical
and clinical research, and have served on various advisory boards of established medical
industry leaders in his field of specialty, such as Olympus, Fujinon, Karl Storz, Boston Scientific,
Philips Imaging, General Electric Imaging. He has also been on the early advisory boards of
medical technology start-ups that have successfully exited, such as PneumRx (British
Technology Group), Asthmatx (Boston Scientific). He was recruited to be the Chief Scientific
Office and subsequently the Chief Medical Officer of Prolung / IONIQ Sciences Inc., working on
biomarkers and Clinical Decision Support in lung cancer early detection. Most recently he has
been appointed the chief medical advisor to Strandsmart Inc, a leader in the field of cancer
liquid biopsies, with novel pathfinder technology to combine high yield Circulating Tumor Cell
(CTC) capture with downstream harvesting for tumor cell expression profiling in advancing non-
invasive cancer diagnosis and directing personalized therapy.
Dr. Yung remains committed to patient care and continues to see and care for patients in
the ambulatory and in-patient clinical settings. From his personal international background of
having been born and raised in East Asia, extensive collaboration with physician scientists
across North America, Europe and East Asia, he has a deep appreciation of the value of
engaging in multidisciplinary and public-private partnerships to advance the medical sciences
and effective delivery of efficacious therapies to the bedside.
Mark Connelly PhDChief Technology OfficerMark C. Connelly, Ph.D., is Vice President R&D for StrandSmart. Dr. Connelly has been leading research and development in the field of rare cell detection and diagnostics for over 18 years.
After 14 years with DuPont and Johnson & Johnson, he was named as Vice President, Reagent Development for Immunicon Corporation and Veridex LLC; where he led the development and commercialization of the CellSearch System. He continued as Scientific Director and Site Directorfor Janssen Diagnostics and became the Chief Industrial Operation and Research andDevelopment Officer, US for Menarini Silicon Biosystems. Over the last 32 years, Dr. Connelly has led the development and commercialization of numerous IVD and RUO products and services in the fields of Clinical Chemistry, Retrovirology, Flow Cytometry, Blood Banking, Autoimmunity, Cancer Diagnostics, and Pharmaceutical Drug Development. Dr. Connelly received his B.S. in Biology from Syracuse University, his Ph.D. in Immunochemistry from the University of Rochester, and completed a postdoctoral fellowship in Molecular Parasitology at Michigan State University., Wes BlakesleeGeneral CounselWes Blakeslee is a lawyer, engineer and entrepreneur, and is Principal of Blakeslee, LLC. (wesblakeslee.com) which provides legal and consulting services to universities, university startups, corporations, inventors and entrepreneurs in matters of technology transfer, operations, sponsored research, business formation, moving technology to market, and expert witness services in these and related areas. Blakeslee, LLC provides support to universities regarding policies, particularly intellectual property, conflicts of interest and commitment and sponsored research policies, as well as faculty dispute resolution services. He is a co-founder and General Counsel of StrandSmart, Inc., a startup that licensed and is developing a university invented biomedical technology.
A former NASA engineer, Wes became a lawyer and after more than 20 years in private law practice joined the General Counsel's office at Johns Hopkins University where he practiced intellectual property and complex business law. In 2006, Wes was appointed Executive Director of Johns Hopkins Technology Transfer, transforming the office into one of the strongest in the US. He is Senator of the Industrial and Professional Advisory Council of the Penn State Department of Engineering Science and Mechanics, and in 2013 received the Penn State Outstanding Engineering Alumni Award the highest honor bestowed by the College of Engineering.

Mark Myslinski COOMark is a serial life science entrepreneur with multiple exits under his belt, and he is also the only guy to successfully take a liquid biopsy for cancer through the FDA and to the market. Mark was the General Manager of Johnson & Johnson's Veridex unit and the platform is known as CellSearch™ assay. Mark serves as StrandSmart’s Chief Product Officer and is focused on leading the technology transfer process through the product development and approvals phase to market, ready for every physician's office in America. Mark will ensure the manufacturing process is scalable and compliant. Mark’s experience is on the development and commercialization of novel diagnostic tests to the worldwide marketplace.
Ryan Dittamore MBAChief Commercial AdvisorRyan Dittamore has developed and commercialized multiple oncology products utilized in medicine today. Ryan is the CEO of Cordance Medical, working on enabling precision medicine for neuro-oncology patients. Previously, he was Chief Business Officer of Decipher Biosciences, acquired by Veracyte ($600M), and Chief of Medical Innovation at Epic Sciences, where he led the clinical development, reimbursement, guideline support, and commercial partnering of the AR-V7 CTC test (the first predictive test in prostate cancer). Ryan has also held roles at Roche Diagnostics (Ventana), Genisphere (Code Biotherapeutics), and Bio-Rad. Cumulatively, he has partnered with over 60 biopharma companies, is the author of over 30 peer-reviewed publications, and is the inventor of 12 patents.
Amount Raised: $20,550